THE LONG WAIT IS OVER and I am so pleased to announce that The Simmertones, The Embezzlers and The Skata Tones play Exeter Phoenix for Phonic FM on Saturday 2nd February 2019, the 1st proper night out after Xmas. This is the 4th year for this very popular gig and after sell out crowds for the last few years I am expecting tickets to sell out fast, Expect lots of great Ska and Reggae, dancing and meeting lots of great people and fellow skankers.
There are only 200 early bird tickets so get them whilst you can, tickets on sale now at www.exeterphoenix.org.uk or 01392667080. 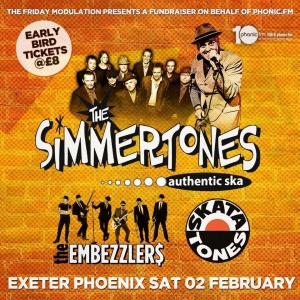 Over the past decade The Simmertones have established themselves as one of the UK’s leading authentic ska and reggae bands. These nine South West musicians regularly get packed venues and festivals jumping with their exciting and infectious live sound.

During 2016/17 The Simmertones’ live shows continued to reach new heights, with prestigious and well received appearances at The London International Ska Festival, Madness’ House of Fun Weekender, The Looe Music Festival, Bestival and Camp Bestival. 2018 is another cracking year for this special band as they will play The Main Stage at this year’s HOF on the Friday night just before Madness take to the stage.

The band are frequently played on BBC Radio 2 and BBC 6 Music, particularly by Jo Whiley and Steve Lamacq, who have playlisted their songs ‘Run For Your Life’, ‘Perhaps, Perhaps, Perhaps’ and ‘Dr Who’.

The spring of 2018 will see the release of an eagerly awaited, brand new studio album entitled ’10 Feet Tall’. The Simmertones’ previous album ‘Something For The Weekend?’ won ‘Best Album’ at the South West Music Awards in 2013. The album received worldwide airplay, as well as rave reviews from Ruby Turner and members of The Specials and Madness.

“Really great to see this hardworking, dedicated band pushing on with confidence. Real infectious and got me bopping along!” Ruby Turner

“These guys are bloody roasting!”

“This Simmertones album is so uplifting! Hypnotic, thirst inducing tunes.”

The single was produced by esteemed veteran Richard Digby Smith (Island Records, Bob Marley, Led Zeppelin, Sparks and Free), with the finishing touches applied by Dave Eringa, of Manic Street Preachers fame. These elements combined with an incredible recorded performance by the band, merged to create the authentic sound heard on the finished recording.

The bands’ first EP “Presenting the Simmertones, Volume 1” is best known for a wild ska reworking of the Doctor Who theme tune, which continues to receive regular national airplay on BBC Radio 1, 2 and most recently on a BBC 6 Music Dr Who special in 2017.

Their second EP “Everything’s Comin’ Up Ska”, features Steve Cradock (Ocean Colour Scene/Paul Weller) on guitar and received airplay on both Alex Lester and Gideon Coe’s on BBC Radio 2. The single ‘Bring Your Love to Me’ was played on BBC 6 Music by DJs Huey Morgan and Steve Lamacq and its video featured a voiceover by actor Phil Daniels (Blur ‘Parklife’, Quadrophenia).

Since forming in 2007, The Simmertones have continued to build a strong following across the UK and beyond through their live gigs and recordings. With their exciting, original sound and rising popularity, the future looks very bright for The Simmertones.

Playing the best in SKA and 2TONE from Desmond Dekker, Toots and Jimmy Cliff to The Specials, The Selecter, Madness and The Beat etc. Oh… and there’s even a tiny little bit of The Clash thrown in for good measure!

Going back to the late 70’s and early 80’s the sounds of the likes of Madness, The Selector and The Specials were floating around on the airwaves, uplifting the spirits… and that music still does that to this day because SKA and 2TONE was, and still is, a movement that unites people. All sorts of folk turn out for EMBEZZLER Shows and no matter who they are and where they are from, they are all there for the same thing – The Music (oh… and maybe a few beers too!!!) So whatever your roots… Come join the extended family!

Comprising of a bunch of highly experienced and extremely dedicated musicians , The Embezzlers have every base covered with a top notch horn section, killer keys, perfect off beat strings, crazy tight drums and all fronted by ‘Murph’… Front Man with more energy than a Gallon of Red Bull! If you can keep up with him then you are a true ‘Bezzler’!!!

EMBEZZLERS gigs are an experience not to be missed. HIGH ENERGY, HIGH SPIRITS, LOTS OF SINGING and most definitly LOTS of SKANKING going on. Crowd participation is by no means compulsory of course, but you wont be able to help yourself tapping your foot, let alone coming right down the front and getting fully involved!!

No gig or venue is to big or too small, whether the audience amounts to 50 or 500, the whole place will be bouncing up and down before you know it… Thats the Embezzlers way!

The sharp-dressed, high-octane group has been stunning audiences at gigs and festivals over the past few years, going from strength to strength. With a fusion of ska, reggae, dub and dance sounds, Skata Tones always have the crowd jumping, skanking and singing along.