…and again on Sunday. Not a bad way to end the year…

When Skata Tones were booked for the Nutty Boys’ annual weekend festival, it felt like a piece of the jigsaw had just clicked into place. The group have supported and played alongside many of the genre’s great bands, and this would be another big achievement.

A notable influence on the band, Madness have an incredible following and draw a huge audience to the weekend festival at Butlin’s Minehead Resort every year. Now in its 8th chapter, the event brings fans in their Doc Martens, Harrington jackets and Trilby hats from all over the UK and (one step) beyond…

As it goes, Skata Tones found themselves billed to play the Skyline Pavilion stage just before the Saturday night Madness showcase. Stepping out before a crowd of 5000+, the opening guitar chords rang out Holiday To The Moon and before long, the boys had hammered straight in to Live Your Life Up, by which time the crowd was already moving with the beat. By the time Robbie turned the microphone on the audience to sing along, everyone was in full voice, raising the roof with their participation in Fire, and the aptly named Sing With Me.

45 minutes flew past and before long, the final stabs of Rolling Into Work gave way to a cheeky nod to Baggy Trousers and huge cheers from the arena.

Robbie said, “It’s an amazing feeling to get such a warm reaction to our original songs. Most people have never heard them before and really got involved!”

“Amazing performance, best of the weekend so far…”

Madness arrived soon after and blew everyone away with a non-stop parade of solid gold hits. What a night. 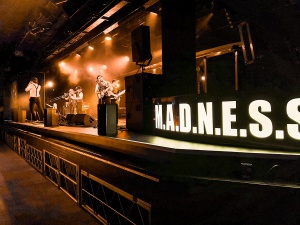 And with it, many a weary and hungover ska fan! Luckily for them, Skata Tones were due on again, this time at Centre Stage. There was a little drama, however, as just an hour before the set, our own Sir Strawberry H. Jamalot had to rush to the aid of Madness’s Lee Thompson who had put his own saxophone on the departing tour bus despite having a set to perform with The Silencerz! Needless to say, Strawberry was happy to oblige and Lee spent the next 50 minutes squeezing notes out of his horn, before handing it back in time for Skata Tones to hit the stage.

An eager crowd awaited the band as they stepped out again, bringing the room to a crescendo. Hangovers were forgotten as everyone got their second bite of the Skata cherry.

What did they say?

If you were there, give us a shout, like us on Facebook or check out our up-coming gigs!

The band would especially like to thank the awesome crew and staff at HOF and Butlins for looking after us so well. Front of house, backstage, accommodation and everywhere in between was an absolute pleasure!

Skata Tones are back in the new year, starting with a triple header with The Embezzlers and fellow HOF performers, The Simmertones at Exeter Phoenix. A full programme of festivals is coming together for summer 2019 too!