Rolling Into Work featured on this week’s David Rodigan show!

A quiet Sunday night turned into a party when Skata Tones appeared on national BBC radio, courtesy of the one and only “Ram Jam” Rodigan.

One week after appearing on the same bill at the annual Madness House Of Fun Weekender, the legendary reggae DJ slipped in the opening track from the band’s 2018 A Day At The Fair release.

Introducing the hitherto unknown music with much enthusiasm, he played Rolling Into Work before remarking; “It’s a bit nutty, isn’t it?”

You can pick up the show HERE for up to a month after broadcast:

Mr Rodigan followed up by saying; “There’s another track on there I quite like called ‘A Day At The Fair’ and also another track called ‘Fire’ you might like to investigate…”

The band is absolutely thrilled to receive airplay from one of the biggest promoters of reggae and ska music in the UK, and a huge influence on Skata Tones, let alone appearing amongst new and vintage tracks by some of the industry’s greats. 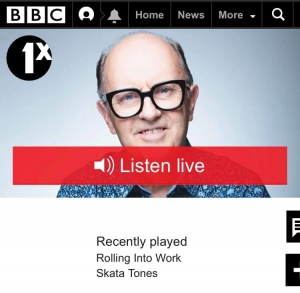